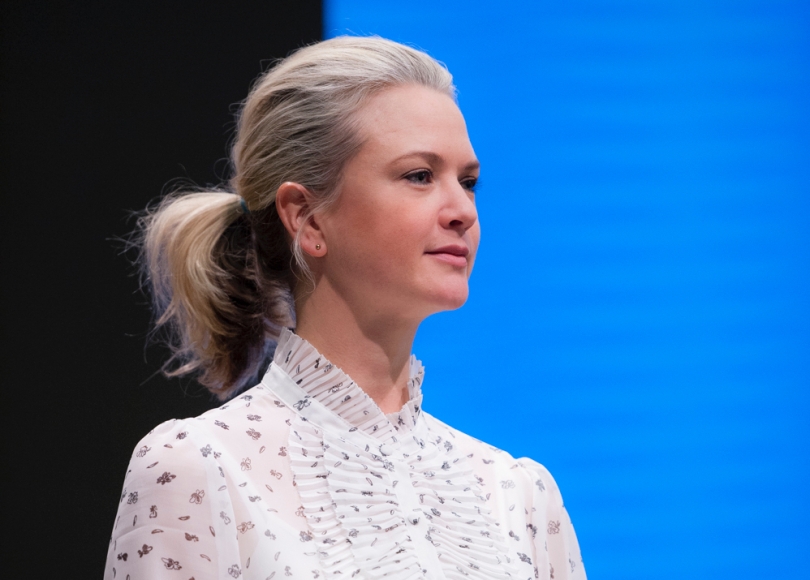 Shannon Manders is the Editorial Director at Global Trade Review (GTR) and a freelance consultant to several international trade industry organisations. Having covered the trade finance sector for more than a decade, she is a leading voice in the industry.

In her first-ever interview on the other side of the table, Shannon explains the role of the media in the world of trade, export, commodity and supply chain finance.

Q: What is the role of the media in the world of global trade and trade finance?

Manders: Like the role of media everywhere, our function is to inform the public – in this case, all the players involved in trade and trade finance – which we do by reporting on new developments in the industry, and taking a closer look at topical events, people and issues. GTR is an online and print publication, and our reporters produce news stories, videos and longer-form in-depth features. As is the case across the wider field of journalism, integrity is important to us, and we’re committed to carrying out our work in an accurate, honest and impartial manner.

Because GTR is a niche publication, we have a fair idea of the topics our audience is interested in, which makes it easier to decide which stories are most relevant to our readers, and also how to contextualise our coverage.

There aren’t many independent trade finance publications around. But over the last few years we have seen trade issues, such as disputes about tariffs and rising protectionism, covered extensively by the mainstream media, which means that we need to continue to focus on providing distinctive content. Our niche is an advantage as our reporters have a high level of specialist knowledge, and we have access to many trade experts across the globe, so we can really get to the heart of the issues affecting the industry.

Q: What themes will dominate global trade coverage in 2020 and onwards?

Manders: Good question – and we get asked this a lot! I think there are three main topics that are going to continue dominating headlines over the next few years: financial technology, or fintech – we certainly haven’t seen the end of new innovation that uses technology to drive improvements in finance, and collaboration around these initiatives; sustainability – new products and ways of thinking to finance sustainable endeavours; and the people behind the business – I think we’re seeing a change in consciousness across many organisations in the industry as we have more conversations around where the market sees itself in the future.

My colleagues and I jokingly call these three topics – technology, sustainability and people – the ‘holy trinity’ of trade – but they are where we’re seeing the most interest from our readers.

Manders: It’s a big world out there, and there is so much happening in the trade space – I think it’s a constant challenge to ensure our coverage is truly global, and that we’re speaking to sources whose voices we seldom hear.

A lot of people don’t know this, but we’re a fairly small editorial team at GTR – myself plus 3 reporters and an editorial assistant – tasked with covering the entire globe. So it’s essential that everyone’s productivity is high on a daily basis, which can be tricky when you’re travelling, for instance.

Sometimes the topics that we write about can be pretty complex – and it’s our job to present information in a way that our readers will be able to easily comprehend – so we often joke about how we need to ‘get a quick law degree’ to cover some of the more arcane developments in the market. Having said that, because we’re subject matter specialists, when we do have to rely on intermediaries to interpret aspects of stories for us, we’re still able to form an independent view.

Other challenges include getting people to go on record to talk about juicy topics (the rise of financial PR services means that the information we get is often very sanitised); finding new angles on worn-out topics (like Brexit, for example – I think we’ve all grown tired of the headlines about ‘uncertainty’); and managing people’s expectations about what we will and won’t cover (as journalists we act independently, and so it’s imperative that we distinguish news from advertising – I think a lot of people don’t get that).

Q: What does your role as Editorial Director at GTR entail and how do you manage to combine that role with also providing independent consulting for other organisations, such as the International Trade & Forfaiting Association and the British Exporters Association?

Manders: My role at GTR entails commissioning and editing all editorial content – news, features and videos – which we publish online and in print. GTR publishes news on a daily basis, and sends out a weekly enewsletter, and we print 8 publications annually – the quarterly GTR magazine, and 4 annual GTR+ supplements, which are focused on a particular region or sector.

Because I essentially need to oversee everything that gets published, the work doesn’t ever really stop. Thankfully I have an incredible team! I try and promote a culture of initiative-taking, and they are all proactive, engaged and committed team players.

I also get involved in panel moderating and conference chairing at GTR – and other – events, which I really enjoy. I’m proud to be able to represent the company at events all over the world.

A year ago I decided to take a small step away from GTR and try a few things of my own – be my own boss, as it were, in addition to keeping my Editorial Director role. I was lucky in that my bosses at GTR gave me their blessing to take a day a week to do this. It’s been so much fun working with the likes of BExA and ITFA, where I engage directly with members, help out with driving strategy, and provide editorial support – anything from ghost-writing to creating bespoke publications. I’m hoping to grow my client base in 2020 and take on other exciting projects.

How do I manage all the combined roles? Truthfully, with some difficulty. Let’s just say that I always feel that I’m spinning several plates, and end up working crazy hours. But I do enjoy it!

Q: What do you most enjoy about your job(s) and what advice would you give to young people who are curious about trade finance and business journalism?

Manders: There are so many things I love about my job – which is probably why I’ve been with GTR for 11 years now! I enjoy the responsibility: being able to take the editorial lead on one of, if not, the best trade finance publications in the world; the wide variety of the tasks that I do on a daily basis; the topic: I genuinely find trade and trade finance incredibly interesting and like to think I have a good understanding of the complexities of the business; and the people: I learn so much from industry stakeholders on a daily basis.

I also love the travel. I don’t do as much as I used to – there was a time when I was travelling on average a week out of every month, and because it’s less frenetic now, I feel like I can appreciate it more.

GTR is a rather open-minded organisation about new business ideas and opportunities. So, for example, when 6 years ago I had the idea for an event about, and for, women in the trade finance industry, the entire company was really supportive of it. We’ve now been running GTR Women in Trade Finance events in London since 2015, and I’ve also had the privilege of taking the conversation ‘on the road’ to a number of exciting locations, including the US, Hong Kong, South Africa and the UAE. We’ve come a long way since the inaugural Women in Trade Finance event, and we’ve also broadened the topic to look at ways to attract young talent and create a new workforce dynamic and environment for young trade professionals to learn their craft. Some tradeXplain readers will have been to our recent Future-Proofing Trade Finance event in London, which I thought was incredibly interesting, and which we’re definitely keen to repeat in 2020.

To those young people interested in a career in business journalism, there are two – pretty straightforward – things I’d recommend doing more of: reading and writing! Read to learn more about the topic, and to expose yourself to different styles, genres and voices. And write: practice makes perfect. Start a blog or a website and contribute to it on a regular basis. Just because you’re not being paid or published, doesn’t mean you can’t write about topics that are of interest to you. It’s also a great way to build a body of work that will be vital to landing your first journalism job, as you’ll be able to demonstrate to the editor that you can write, and are passionate about doing so.